In keeping with our previous theme of “rooting” out what sets Shakeology® apart from the competition, today’s ingredient spotlight focuses on the uniquely sweet and nutritious yacon root!

The country of Peru is not only our source for the maca root found in Shakeology (see previous Ingredient Spotlight); it’s also where we get another of our superfoods—yacon! In case you didn’t know, Peru is more than 1,000 miles long and 500 miles across at its widest point. The country has a variety of microclimates and sudden changes in geography, hence many diverse agricultural opportunities.

The yacon is a perennial plant traditionally grown in the Northern and Central Andes from Ecuador to Argentina. It is known for its crisp, sweet-tasting, tuberous roots. Its texture and flavor are very similar to jicama, except that yacon has slightly sweeter undertones, attributed to a sweet substance called inulin. Until as late as the early 2000s, yacon was hardly known outside of its limited native range, and was not available in urban markets. However, press reports of its use in Japan for its low-glycemic properties made the crop more widely known in Lima and other Peruvian cities. And the word has continued to spread; we are now seeing product offerings such as yacon syrup, juices, jams, and teas. All products are popular among diabetics and those trying to manage their weight.

Fun fact: Another name for the yacon is the “Peruvian Ground Apple.” 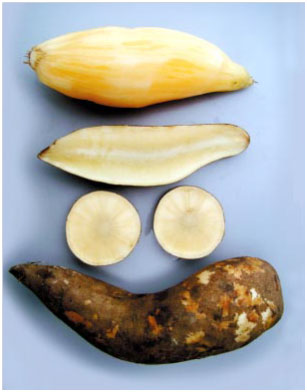 These edible tubers are composed primarily of water and fructooligosaccharides, an indigestible natural sweetener. Fructooligosaccharides (or FOS) taste sweet, but break down slowly, passing through the digestive tract unmetabolized, and thus have very low caloric value. As an additional nutrition bonus, these FOS have a prebiotic effect, meaning that they are used by “friendly” bacteria (probiotics) that favor colon health and digestion. Probiotics are the good, healthy bacteria strains that live in your intestines, help to digest food, and help keep you “regular.” These healthy bacteria need special nutrients called prebiotics to grow and thrive. Yacon is known to contribute to better digestion, colon health, and healthy immune function. It’s a powerful antioxidant, and studies show that yacon may help support ideal blood sugar levels and healthy cardiovascular function. An Argentine study following daily intake of yacon syrup by women with high blood cholesterol levels over a 120 day period showed a significant decrease in body weight, waist circumference, and body mass index among those tested. The consumption of yacon syrup was shown to increase frequency of elimination and satiety sensation.

HOW OUR YACON IS SOURCED

The pure ingredient used in Shakeology is found near Huanuco, a mountain town known for the most extraordinary yacon. Huanuco is located in an area called Canchacalla at about 8,000 feet in the Andes. The farmers we work with are some of the more progressive growers in the area, who consistently do investigation into the best varieties. They work with academic experts who regularly run “variety trials” to select the best variety with the highest content of FOS. These farmers also do a lot of investigation into the best organic practices including using microorganisms and beneficial bacteria to stimulate the plants’ growth and disease resistance, so that pesticides are unnecessary. Our farmers use only the root portion of the yacon plant, and the rest of the green material is tilled back into the ground as green compost. This increases crop yields, which is also a sign of good quality.

So let’s break it down in terms of cost to you:

Sure, that’s not a lot to spend, but consider how unlikely you are to know how that yacon was sourced or how potent it is. If you were to separately attempt to purchase Shakeology’s 70+ healthy ingredients from whole food sources from around the world (including antioxidants, phytonutrients, adaptogen herbs, prebiotics, digestive enzymes, vitamins, and minerals) and match the benefits and nutritional content of Shakeology, you would easily spend over $300 every month—that’s two and half times the cost of Shakeology, the Healthiest Meal of the Day®.

There are fewer published studies on the health benefits of yacon than on maca root, due to its more recent “discovery” and commercialization. Here are a few highlights:*

*For general information and education purposes only.

All trademarks, products, and service names are the property of their respective owners.